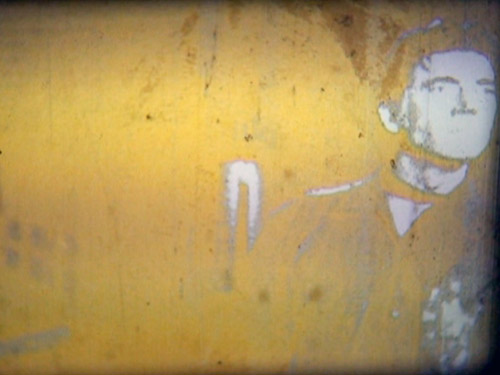 POLAR is a performance, a film construction trough the communication between Super 8 projections, its inherent sound track and a musical composition, it´s the creation of cinema executed in real time.
Project in collaboration with Luis Teixeira. This project has been developed with the support of Serralves Foundation.

By using simple mechanical means for elaborate hypnotic ends, this performance aims at being a reinterpretation of the materialization of cinema from visual and sound loops. It is based on the rejection of artistic media patterns like painting and adopts materials and forms that are much more ephemeral and transient. It’s built upon the projection rhythms, thus directing this experience to a human and personal scale. The final about-face happens when attention is diverted away from the screen onto the film heap spread over the floor and away from the very film heap onto the very audience, thus remaining only the audience and a pile of film.

This performance is a singular and unique moment, it is determined by the variation of the space-time factors.
Time and space are the basis for the ephemeral installation. The deconstruction of spaces, concepts and ideas, and the construction of a spatial truth in a given place and time, will allow a materialization in a definite way solely at the memory level. The sense of time is non-time, from where this fruition emerges immediately, although its full fruition remains as a memory.

This project starts from the exploration of the projected light, conjoining space and time. By using analogical devices, movie projectors and the celluloid are the material basis for light and shadow constructions—the elementary features of cinema. By conditioning dislocation, I explore that movement by redirecting light mechanics in order to potentiate the medium rupture. The magnetic soundtrack inherent to the medium is the material basis for the sound constructions oriented towards a kind of deviation.

This experience aims at providing a different approach and reflexion concerning the idealization of a movie or a composition. It could also create a space for improvisation where the final result is an ephemeral moment not able to be captured or duplicated and, through the synesthesia, elicit a sensorial experience, be it a comfortable one or not, that could go beyond the usual perception capacities.

Starting from the premise of conciliating sensations, uniqueness, unpredictability, materialization, physical manipulation, influence of evolving space and external factors, I intend to develop this project based on the analogical film and on the optical and magnetic synchronous sound of this film and on the audience’s reactions.