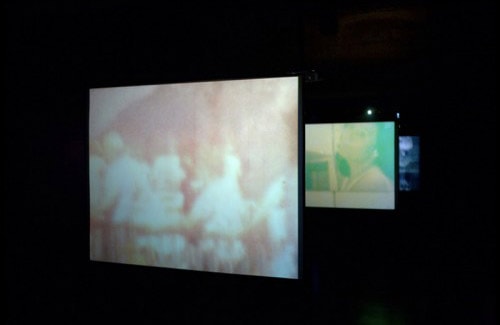 We might as well admit right away: the original material has been lost, even its authors have been lost, all that remains is the wave of a hand, the back of a head, a pair of sunglasses guarding eyes that will never stop closing. Somehow these private gestures caught on super-8 film, repeated again and again in different families in different continents, enacted so that they can stage the act of family itself, all this has slipped away. Has the need passed? Is this what is being presented in Pedro Maia’s dirt encrusted projections? Here are elusive shadows, the delicate materials turning and strobing and shaking as if to emphasize the fragility of the look, the fragility of these family compacts have come apart at last, and in their dissolution, in the dying moments of their foreclosure and abandonment, these pictures have been left behind. They are unmoored, as stranded as their viewers. Lost.

Who will remember? Who has time to go back?

A boy falls asleep buried in his bedspread. When he wakes up he will find his family disappeared, the only one who remains is himself, condemned to repeat a single gesture again and again. So that others might remember.

And let us not forget the materials. If the family has disappeared, if Maia’s Super-8 Series marks the disappearance of a certain kind of family (could we name them the analog family? The ones who have not yet admitted the time bomb of the personal computer?) then its remains are equal parts family fragments and the messenger itself, the chemical base of the film, the scarred acetate no longer able to bear even a picture, only an impression of its passing. This too is a signifier of loss. Here is film at its own graveside, mourning itself. In this last moment for chemical cinema the work of Pedro Maia is equal parts celebration and eulogy. Is it lovely because it has been caught in the final moment before disappearance, standing too close to the fire, all these pictures about to dissolve back into its material support? Is it the hot breath of the end that we find so alluring, even irresistible?

There is so little left to ponder, and so little time that an entire family’s memories has been condensed to a single picture, and then collaged with other families. How cruel these summary acts of recollection, how crude the act of memory. Who amongst us can describe the palm of our own hand, the shadows which fall across our desk each morning? Everything is slipping away, leaking out of our containers of experience. This is the reversal Maia insists on showing us. Never: here it is! But instead, far worse: here it isn’t. The world is disappearing one picture at a time.

Oh look, they are dancing again, and holding a baby in one hand who must be middle aged by now. In the pictures she is too young to recall the original shooting, and by now she has grown too old to revel in the texture of these recollections, the hailstorm of dirt and particles. This is a world which must be experienced touch by touch, up close and personal, the hand draws the wound over and over, knowing that it has come too late, or too early. These pictures belong to a time which never occurred and which can never be remembered. They point only to the impossibility of this time, this moment, this recording. The absent camera person, the one who never appears inside the frame, has been scratched away and left behind, along with the rest of the family. Where once were smiles and Christmas packages and birthdays are now only green mulches and golden bubbles. Perhaps these “abstractions” may stand in place of all those moments left unseen by the home movie camera: the arguments and pills, the lonely sex and the place of employment. The work in other words, where is the work of the picture? And why do we never see people at work in home movies? Labour is only one of the activities banished in these pictures reserved for the vacationing class. Maia’s aggressive assertion of the material base conjures up this lost tide of work, these pictures are hard at it, strained and straining, a construction zone which shows at the same time its own limits, its incapabilities, fault lines and vulnerabilities.

Are we monsters for finding them beautiful?

Soon there will be not even these remnants of remnants, except of course as digitally preserved masters accessible via internet. The conversion of private life into public consumption is already underway. Strangers may yet be born who will cherish our memories in place of their own. They might also be named artists.

Super 8 Series is born from my archive/collection of super8 movies, most of them family movies. This archive started more or less five years ago and its provenience is mainly from street markets, since these “objects” are now considered obsolete and worthless. For me, they constitute an important visual archive of generations throughout different periods of time.

The starting point for this project is the use of the camera as an instrument for the recording of portraits of people. As most of its use was aimed for the amateur, this lead to an incredible proliferation of personal archives which would record special occasions like a birthday or that special holiday in a new place. With this archive I will try to explore the idea of “self-preservation” in film, how one needs to find a way to constitute a physical memory, that will in most cases, last longer than its protagonists.

“Portrait” is the result of the work in the dark room, using analogue means of light manipulation of the film, without the need of a camera. This manipulation of the film is made frame by frame using different sources of light like lasers, leds, etc. This process of analogue manipulation leads to imperfections and unexpected results. I am interested in this so called “errors”, which I will use to create new readings of these films. This project is therefore a mixture of found footage and manipulated film, a “punk” philosophy aimed at creating new readings and new visual experiences and a personal interpretation of the idea of “traditional” portraiture.